I was recently filming with a TV production company at the gardens at Tatton Park. If you have not been, I would highly recommend a visit. We were particularly interested in filming in the Japanese gardens. The film crew and I were privileged to go inside. Exploring the gardens, I noticed the bough of a huge tree sweeping down and hanging over the water. Now most of us would look at that and see it as an imperfection in the tree. However, in that garden, the beauty was the imperfection of that branch as it reflected in the water. The Japanese call this ‘Wabi-Sabi’ (perfection in imperfection).

As I continued through the garden, I became much more aware of my senses. I felt more alert, I started treading gently, placing my feet just so as not to damage any plants. The peace and silence became all-encompassing. There is a feeling of spirits in this space. 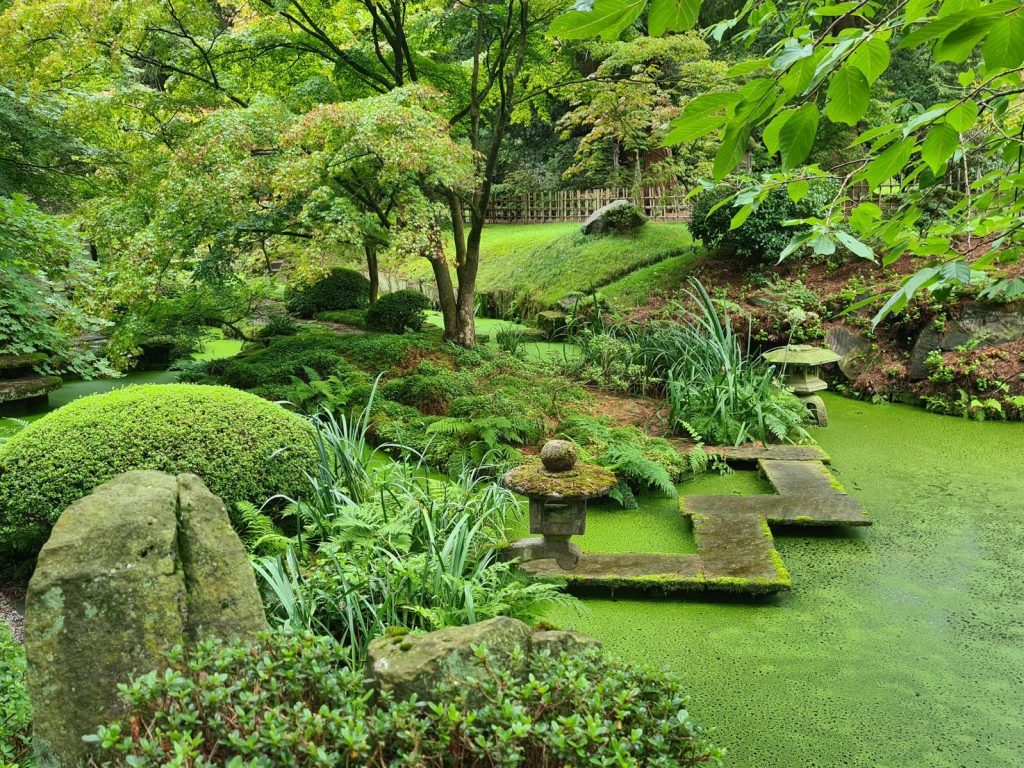 The zig-zag pathway crossing the water. These are often in timber but here it is constructed in stone slabs, leading to the Tea house. Being narrow the visitors have to move along the path in a single file. The movement of the pathway slows the visitor down to be able to take in the views and it prepares them for the Tea ceremony.

When we think of Japanese Gardens it conjures up images of koi carp ponds or lakes, cloud pruned topiary, pine trees, acers, moss, large rocks, meandering pathways, and low bridges. The ethos of Japanese gardens has arisen out of Shintoism but also influenced by Chinese Buddhist monks who came to Japan. They brought with them the concept of the Ying and Yang and the four elements, air, earth, fire, and water which are incorporated into the designs of Japanese Gardens. Both Chinese and Japanese gardens have had a strong association with the spirit world and also the connection between man and nature. We in the western world only seem to be grasping this now. 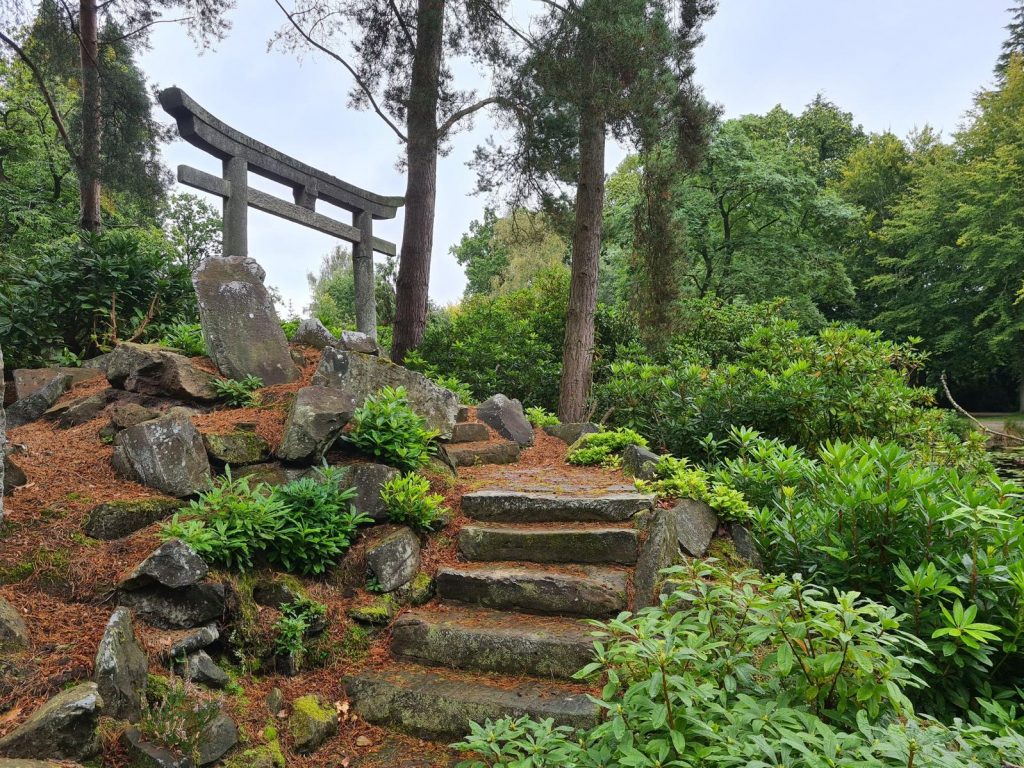 A torri gate. Often these are made of timber that is painted bright red. The gate symbolises the entrance to a sacred space. Buddhist monks and sages would often leave the world to a sacred space in the wilderness to meditate and reach enlightenment. Here the stone steps leading up to the torri gate signifies this journey. 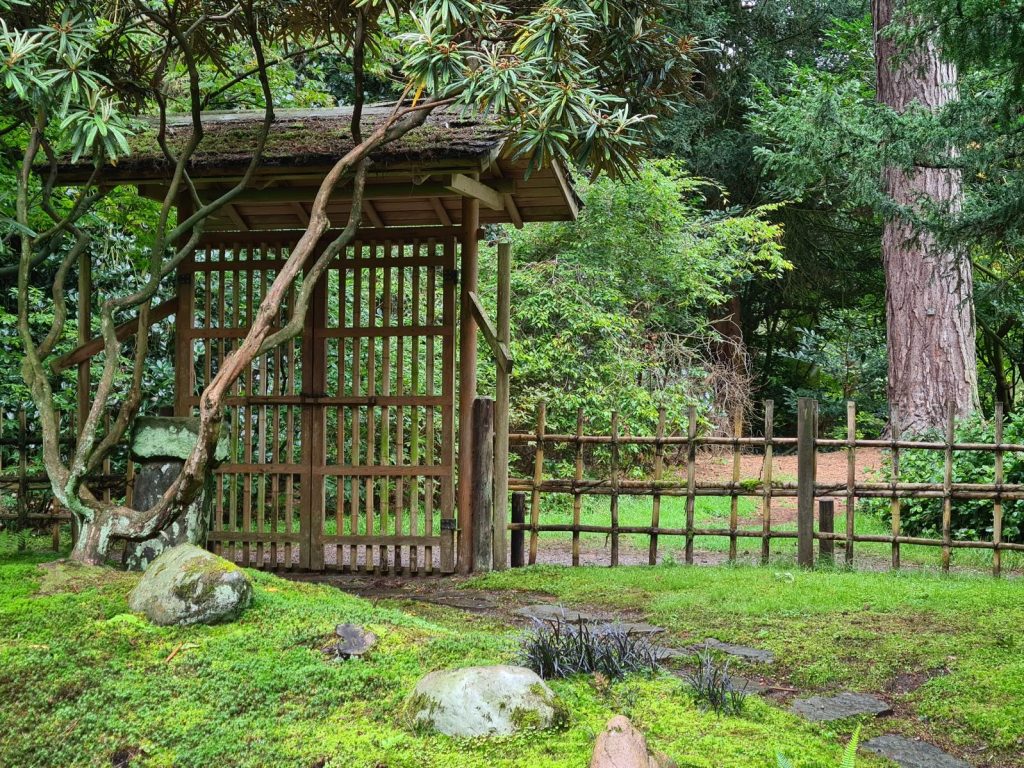 Bamboo fencing in a Japanese garden often represents the line of the forest. Notice the moss covering the ground with the large stone boulders.

The style of Japanese gardens has had a great influence throughout the world. We now find Japanese gardens through Europe and America. But how true are they to the real Japanese gardens? Many plants originate from Japan, but the palette of plants used in a garden is limited. Japanese gardeners are highly skilled artists, paying attention to the smallest details. In the west, gardens tend to be more about balance, symmetry, and repetition but Japanese Gardens are far removed from this. Replicating landscapes, they use natural materials as metaphors. Gardens throughout the world started with the need for food and growing crops but through history, they developed into areas of beauty. For those who could afford them, gardens were a means of showing their wealth by smaller versions of large landscapes. However, in Japan, this garden style has continued to live on.

Japanese gardens are rich in symbolism and spirituality. The formation, size, and even the way a rock is laid can represent different things in a Japanese Garden. Large rocks of varying heights, grouped together, represent a mountain range. A large rock buried and coming out of the earth represents stability and security. A meandering path heading up to a teahouse represents a road to enlightenment. This reminds us that in our old age we leave the world behind in search of spiritual enlightenment. Pine trees are popular in Japanese gardens and they symbolise perseverance. They are often cloud pruned to give a layered effect or tilting to make the tree look windswept. The turtle represents longevity and is depicted by a low flat stone popping out of the water. The crane also represents longevity, but this is characterized by an upright stone. There are no accidents in a Japanese garden. In a gravel garden, the large rocks represent islands or mountains. The gravel is the sea which is raked around the stones. Even within the raking of the gravel, there is meaning. Straight lines depict calm water, and curvy or circular raking signifies waves. Three rocks set as a group are the Buddhist trinity.

Nothing in a Japanese Garden happens by accident. It is all skilfully thought through. Even the pathways are designed with a reason. A tobi-ishi path often seen in Japanese gardens is made of informally laid large flat paddle stones. Walking on a path like this requires concentration. It slows the visitor down giving them time to absorb their surroundings. This has a calming influence on preparing them for the tea ceremony. Plank timbers paths are often constructed like a narrow bridge above the water. They are laid in a zig-zag pattern, again slowing the visitor down to take in the different views. However, with a path like this, we have something more mystical. The Japanese believe evil spirits travel in straight lines so if we walk the zig-zag path it protects us from evil. In the west, we base the design of gardens on symmetry, balance, views, proportions however Japanese gardens are in total contrast. They are asymmetrical and much more in tune with nature which does not have straight lines. 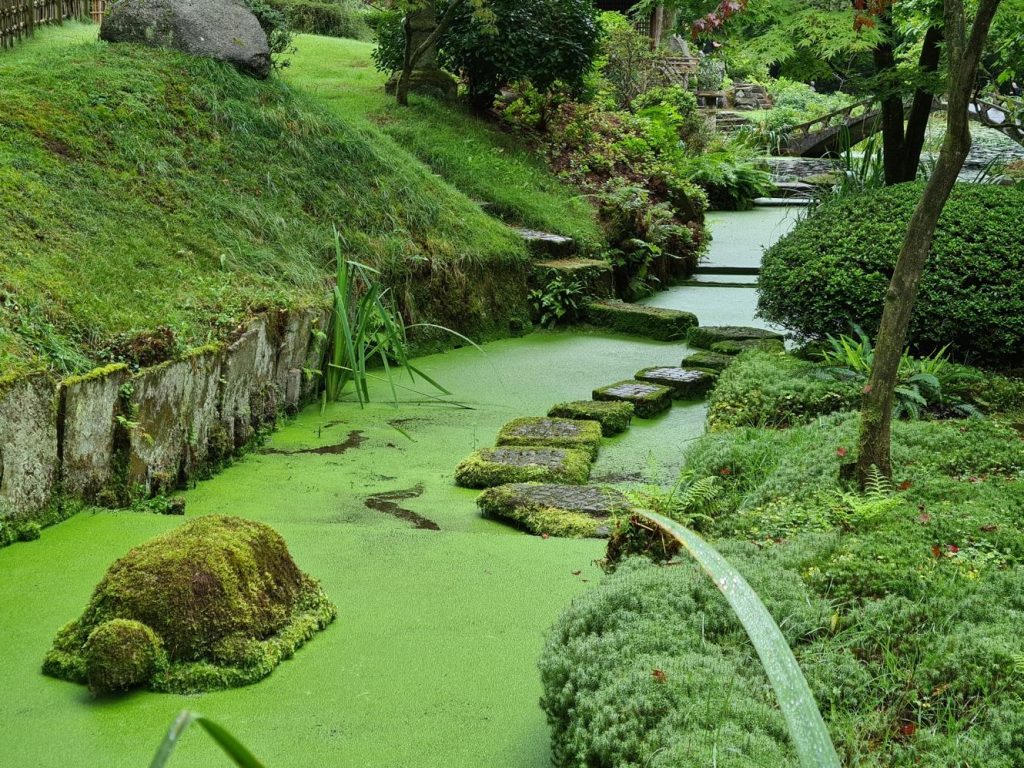 Even plants have associations in Japanese gardens. Bamboo has long been associated with Chinese and Japanese gardens. It symbolises perseverance, tolerance, and fortitude. Pine trees are also seen in the style of both gardens. These signify longevity and hardiness. One cannot forget the flowering of Cherry Blossoms. Although the blooms are short-lived, they announce the start of spring, so it is associated with the transition of seasons. The Plum Blossom flowers at the end of winter when there is very little else blooming in the garden. The flowers appear on the branches before the foliage. It, therefore, signifies resilience and fortitude.

Lotus flowers are very significant in Buddhism and symbolise purity. The Chrysanthemum is the symbol of the Imperial family. We often see these in Japanese prints. Chrysanthemums are very late flowering, hence associated with the autumn season.

Stone lanterns are another feature frequently used in Japanese gardens. These were originally used to line the path leading to a shrine but in the 16th century, tea masters incorporated them into gardens. Ishi toro (stone lantern) come in different sizes and design. Ishi toro symbolise Buddhist cosmology so no matter what the design 5 elements will always remain true. Earth is represented by the foot or base of the lantern that touches the ground. The next section is what the fire-box sits on and this represents water. The fire-box of course represents fire but it signifies intent, will, and desire. On top of the fire-box sits the cap which represents the wind and signifies growth, expansion, and the human mind. The cap is finished off with a bud pointing to heaven representing pure energy, compassion, and wisdom.

An ishi-toro (stone lantern) sits in the foreground of this photo. There is a large variety of these in different sizes and designs, in the Japanese garden at Tatton Park. The Japanese garden was constructed in 1910. 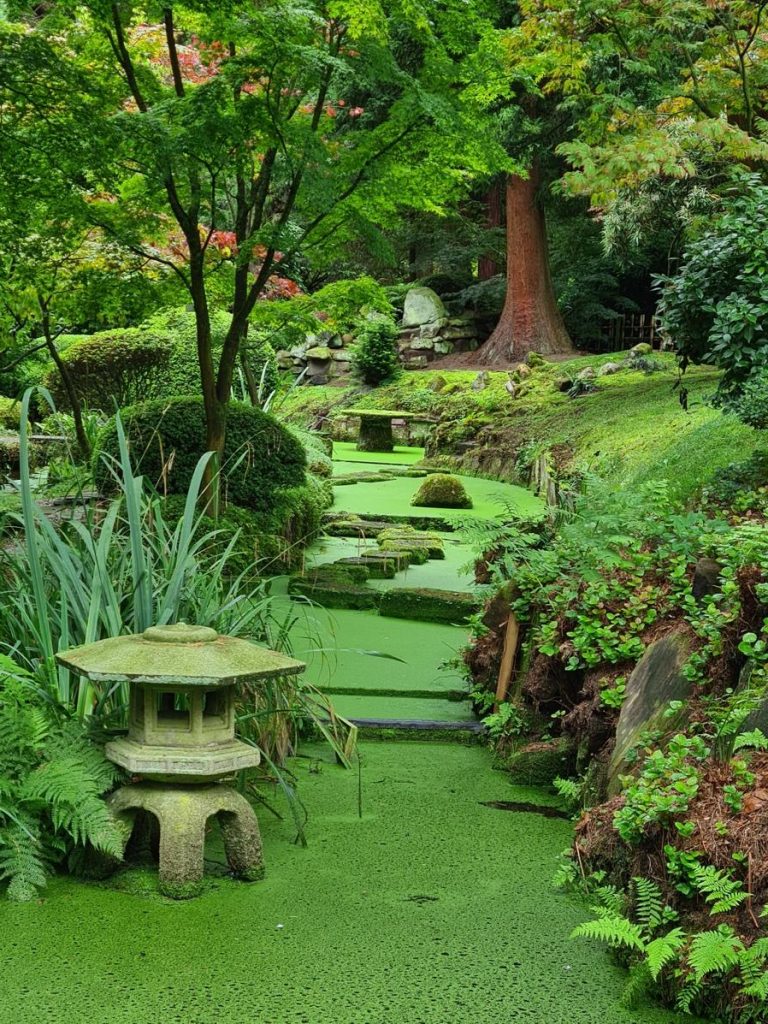 Another feature that might be found in a Japanese garden is the torii gate often painted bright red. These are positioned at the entrance of a Shinto shrine. Their significance is the transition from the ordinary ground into a sacred space.

Japanese gardens have evolved through time but many of the original historical features can still be seen in the modern versions. There is still the same amount of attention to the tiniest details. Symbolism, spirituality, and nature are still engaged in modern Japanese gardens and are the driving force to these heavenly spaces helping the visitor to detach from the everyday woes of life.

Camera Lights Action. The awesome crew that I had the pleasure of filming with at Tatton Park. 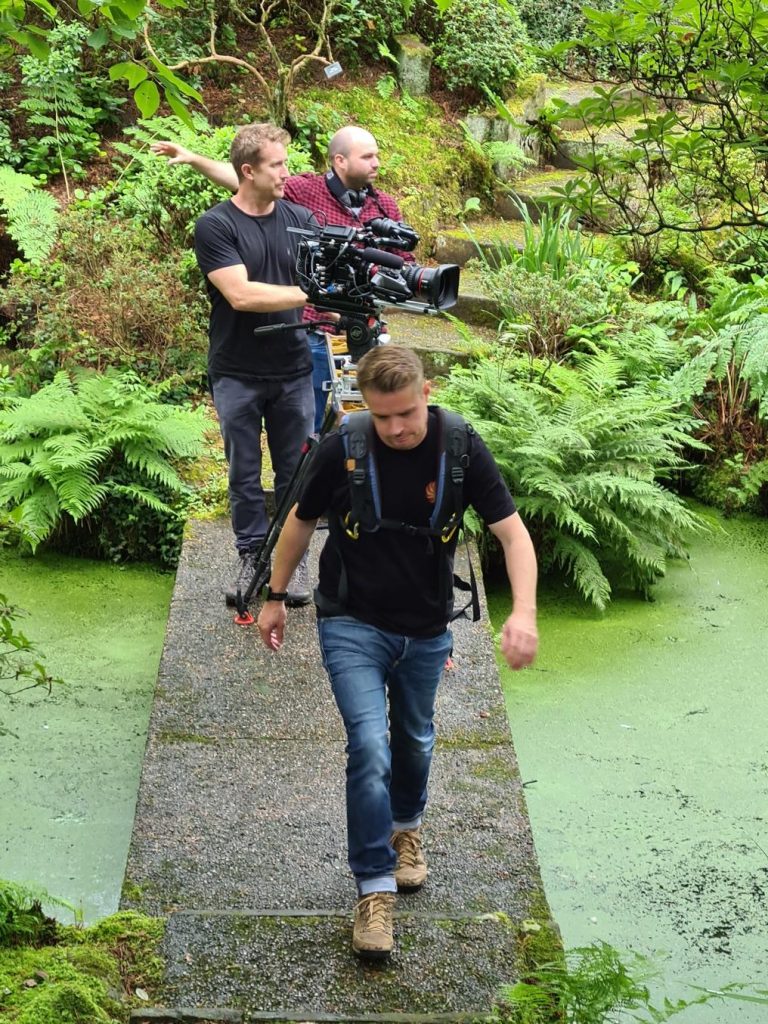 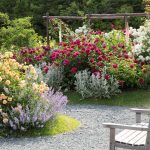 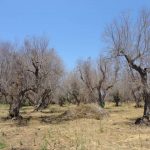